2020 is an important year for many reasons – one of those reasons being that it is a census year. The U.S. Census is vitally important to American democracy as it determines congressional representation, helps inform federal funding decision-making, and provides data that impacts communities across the nation. That is, the U.S. Census data affects our country’s ability to ensure equal representation and equal access. It is a snapshot of the population of the United States and it’s important that every group is accurately represented in that snapshot.

WHY IS CENSUS DATA IMPORTANT FOR BUSINESSES?

The current U.S. labor force – the number of people working or looking for work – is around 162 million and is projected to reach 171 million by 2028.[1] Concurrently, about 18 percent of the U.S. population is of Hispanic descent, with this number expected to increase to 28 percent by 2060.[2] [3] But Hispanics don’t only account for a large portion of the U.S. population – they also account for a large portion of the U.S. labor force. In fact, the Hispanic share of the labor force is projected to increase more than that of any other race or ethnic group, growing from 17.5 percent in 2018 to 20.9 percent by 2028 – that’s one-fifth of the labor force.[4] The share for Hispanic women specifically will increase from 7.5 percent to 9.2 percent, while for Hispanic men it will increase from 9.9. percent to 11.7 percent.[5] The Hispanic community already plays a pivotal role in the U.S. labor force and these projections indicate that their importance to the long-term success of the U.S. economy will only continue to increase. 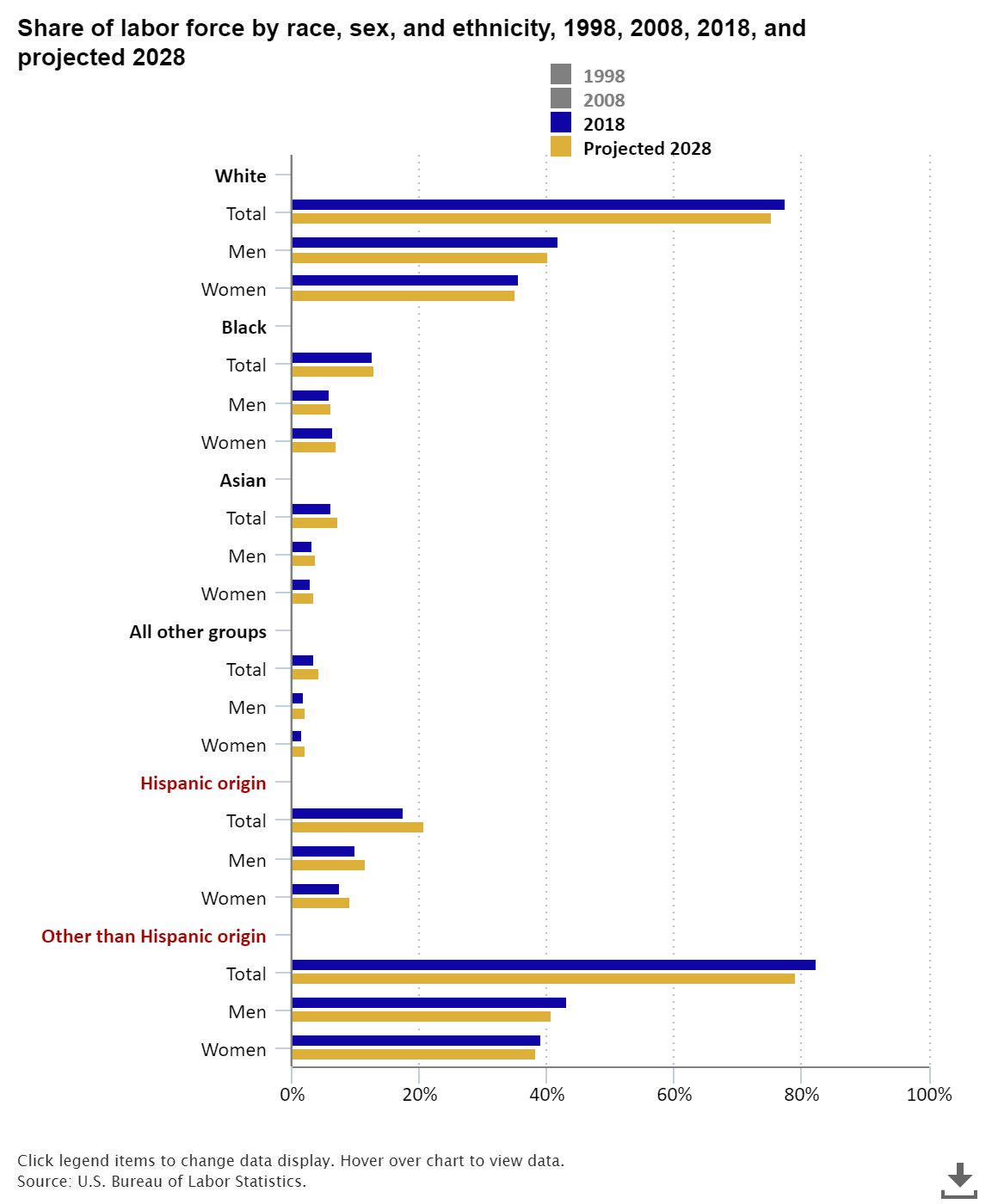 Chart from the U.S. Bureau of Labor Statistics.

For businesses, data from the Census helps inform important decision making, like where to open new stores, factories, or offices and whether to hire more staff. It also can help inform operation and recruitment strategies as well as what types of products and services to offer and where to offer them.[6] What’s more, many businesses use Census data to make pay decisions based on the typical pay of other businesses in the area. Most importantly, Census data can help businesses better understand the communities they serve, including their population trends and growth as well as their unique needs. Therefore, accuracy of Census data is especially important for Hispanics and other minority groups who have been undercounted and underrepresented for decades.

The reality of the Hispanic experience in America is not accurately reflected when they are undercounted in the U.S. Census. This makes it especially difficult for businesses to correctly address, much less understand, the needs of the communities their employees live and work in. 2020 is a decennial Census year and the data collected will go on to affect business decision making over the course of the next ten years. For more information on the U.S. Census and how to take it, visit https://2020census.gov/.