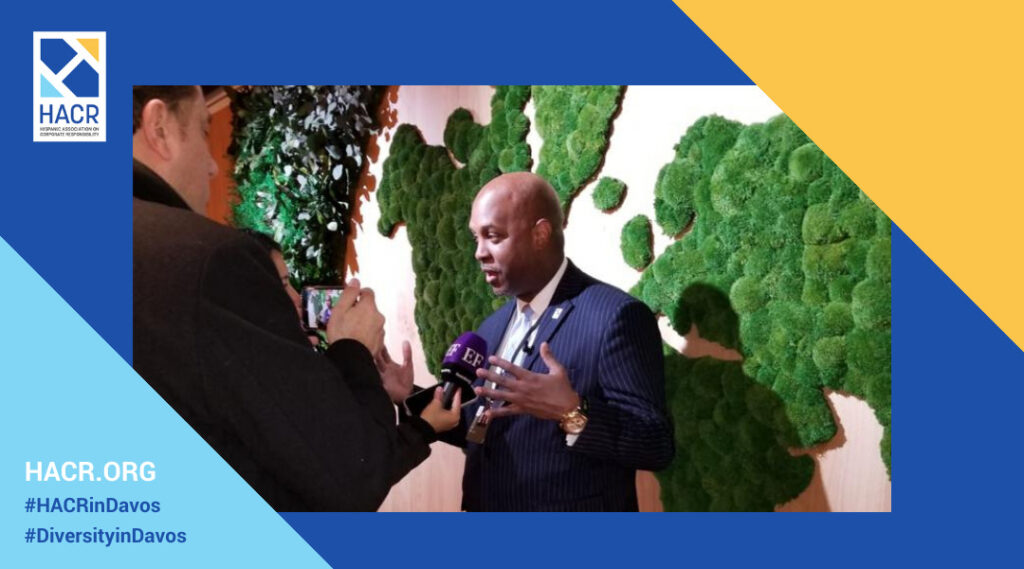 January 12, 2023 /3BL Media/ – The Hispanic Association on Corporate Responsibility (HACR) will make the case for The Power of Hispanic Inclusion™ in Corporate America on the world stage with its participation in the 2023 World Economic Forum perimeter events in Davos, Switzerland. The global gathering, set to happen January 16-20, 2023, convenes thousands of global leaders to address worldwide challenges and regularly attracts Fortune 1000 CEOs, thought leaders, and representatives from the highest levels of government.

The non-profit, Washington-based corporate accountability organization has had a presence at the gathering since 2018, when HACR President and CEO, Cid Wilson, made an unsolicited visit to the snow-capped Swiss village to ensure that Hispanic inclusion in Corporate America was part of the dialogue. He has returned every year since, and he will be accompanied by four other members of the organization to take part in multiple perimeter events this year. The organization has pioneered the strategy of representing US Hispanics who work in Corporate America by engaging with corporate CEOs and executive leaders of US companies in global gatherings that historically lack diversity and inclusion.

“This is an historic moment, not just for our organization, but for all Hispanic people working in the corporate sector in the United States,” Wilson said. “I’m proud that HACR will be visibly present in Davos with five team members, the largest showing of any American non-profit run by and for people of color.”

HACR is teaming up with We Are All Human Foundation for the fourth consecutive time to co-host an activation in Davos titled, “The Hispanic Promise: US Hispanics as a Pivotal Component of Your Globalization Strategy”. The two organizations will present the case for Hispanic diversity, equity, and inclusion as a wise business strategy, as US Latinos hold growing and significant economic power. Conference attendees are invited to take part on Wednesday, January 18th from 5:00 to 6:45 pm local time (CEST) at the Microsoft Café, Promenade 101, Davos Dorf, Switzerland.

Additionally, HACR will make the case for Latina empowerment with its participation in two discussions hosted and livestreamed by The Female Quotient in the Equality Lounge at Davos. HACR’s Vice President of Strategic Engagements and Initiatives, Yai Vargas, will participate in a session on January 17 titled, “Leading with Empathy During Unstable Times,” from  8:00 am – 8:30 am EST (2:00 pm CEST).

Both sessions will be livestreamed via The Female Quotient’s LinkedIn and Facebook pages, as well as their YouTube channel.

The World Economic Forum (WEF) is an international non-governmental organization based in Switzerland and founded in 1971 by Swiss national, Klaus Schwab. The theme of this year’s annual meeting is “Cooperation in a Fragmented World”.

Founded in 1986, the Hispanic Association on Corporate Responsibility (HACR) is the nation’s leading corporate advocacy organization, representing 14 national Hispanic organizations in the United States and Puerto Rico. Its mission is to advance the inclusion of Hispanics in Corporate America in the areas of Employment, Procurement, Philanthropy, and Governance. Through our corporate leadership advancement programs, best-practice conferences, research initiatives, and public engagements, HACR is illuminating The Power of Hispanic Inclusion™ throughout Corporate America.

HACR is one of four leadership organizations that make up the Alliance for Board Diversity (ABD) which include Catalyst, The Executive Leadership Council, and Leadership Education for Asian Pacifics (LEAP). Diversified Search serves as an advisory member. These groups share a goal of advancing inclusion of women and people of color on corporate boards. Wilson currently serves as board chair for a period of two years through the end of 2023.